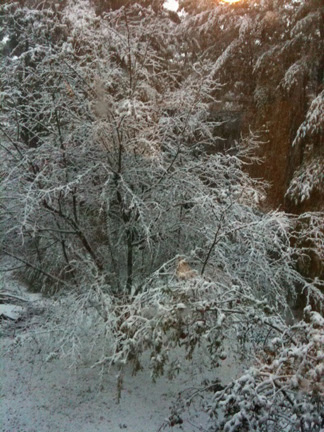 (Taken evening of October 29th, before sun went down and the power went out.)

Lost some really nice landscaping and some well grown hydrangea branches. Sadly, a lot of branches fell around the yard from the huge pines and even took out some wires. Hearing the cracking in the woods all around, was a bit scary; allowing for little sleep.

AND THE SKY DURING THE HEIGHT.... wow, I have never seen anything like it and there's been no mention on the news; it was like the world was lit by a huge, flickering candle. The sky was brightly lit, making it seem more like the morning's early hours. (Transformers on the poles arcing?)

Went store trolling and nothing was open except Target. Gotta love them, 1/2 power and still rolling. All the freezers were taped off, but otherwise everything was "good to go"! So it was a Campbell's Soup night (everyone ate the crock pot fixings the night before).

Thankfully the power-outage wasn't too bad. Went out over-night and came back on in the late evening on October 30th. However, that caused a huge problem at the transformer that feeds us and not too long after it knocked out our power again (for the second night). What time we did spend without the power was spent with a generator; hooked up to run the whole house including internet and tv (aaahhhh!). No suffering like the old days, huh?

Thanks for checking in and seeing how we survived the weather (sadly better than the old days)!
Posted by Leslie Anne Pease at 7:07 PM No comments: