I cannot believe how much my muscles ache and how my shoulders, arms and face are sunburned! BUT, it's a great feeling... I had such a wonderful weekend enjoying the weather and getting the gardens ready for Spring. I just love to plant. So rewarding to grow yummy things to eat however we end up eating most of it RIGHT IN the garden - especially the tomatoes and green beans. Good thing (with some plants) the more you pick the more the plant produces!!!!

Along with all the seedlings started this spring, I am so eager to put out the plants wintered-over in the basement; like my ranunculus! I've been growing them for a few years. I usually plant them in planters however one year I sank a bunch into the ground but when I was digging them up that fall, I didn't do a great job finding them all and left a few over winter. I was told in my zone they cannot survive in the ground during such low winter temps although low and behold the following summer I found a couple blooming right where they were left! Unfortunately, I don't trust my whole collection of bulbs outside like that and usually just bring the planters in and bag the bulbs.

This year I am trying to grow passion flowers. Not sure if I'll be successful because I hear they take a while to germinate and not all seeds grow. But, if I grow the vine flowers/fruit, I hope they too can be brought in the for the following year. Hopefully, I can grow some in a pot and some in the ground. Next year, see which come back! I've been lead to believe the plant might handle this zone's winter temps. It will be fun to see.

Posted by Leslie Anne Pease at 8:11 AM

That Time Of Year...

It's that time of year for planting and gardening again! I love putzing around in the garden and growing fun things; flowering bushes, flowers for cutting and veggies! Most of the plants I have either started from seed or purchased the plant, then took cuttings and rooted the cuttings for more!

Last year I had an premature start on the gardens. Spring seemed to come so early and everything started to bud. I took that as a sign it's time to plant my seedlings. Big mistake that was... a week or two after all the gorgeous weather, we had frozen precipitation which killed most of what I planted and all the buds died off my well established perennials and flowering bushes; hardly any lilacs in the Spring nor hydrangea in the late summer.

This year, it's been such a successful crop and the seeds were so fresh - in the event that we have a sudden attack of winter, I'd hate to see them with frostbite. So, I have been holding off planting until Mother's (or later).

However, no one told my plants that they are not outside!!! Soaking in the southern window's sun and absorbing the wood stove's heat, The tomato plants think it is ready for action and the plants have started their tomato flowers already. (Guess I started those seeds a bit early). 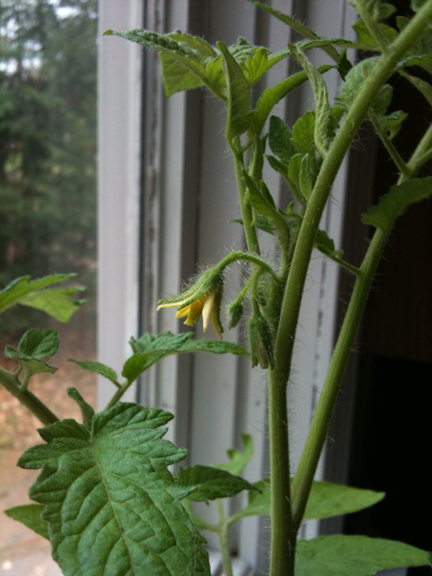 Among other plants I also seeded some thyme which as soon as I turned my back, they sprouted their first leaves! It was less than a week and "POP!"

LOL, and to think I considered kicking back and not planting seeds this year. But, when that certain time of year came around for soaking and sinking seeds, I just couldn't hold back.

Posted by Leslie Anne Pease at 9:10 AM

Good news for the blog.

As you know, they found the two suspects whom were responsible for the Marathon bombings. That was interesting as it unfolded.

In-laws were out of town and safe. That was also a relief to hear. They live very close to the action and were glued to the TV as the excitement took over their town.

Everything here at home is back to normal, too. Next week's Spring Break and not a moment too soon! Had to cancel our plans but that's ok... There are plenty more vacations we can take.

Electric billboards that usually announce traffic flows, construction or Amber Alerts have been posting the breaking news. Interesting all the "Firsts" that have come our of this event. All colleges in Boston closed. NEVER before has all MBTA lines have been cancelled indefinitely. Buses being used only to shuttle police into and around the Watertown area.
Posted by Leslie Anne Pease at 7:32 AM

Amazing events unfolding in Boston. We used to live in Watertown area. It is a wonderful Italian area that was safe and quiet. My sister-in-law and her husband live in Watertown, now. I am sure they are safe in their home.

Incredible, the trains, subway and colleges are lockdown or "Shelter-In-Place" all over Boston; Boston is basically shutdown.

Good luck to those in Boston and hope this ends soon.

Posted by Leslie Anne Pease at 6:39 AM

Boy It's Been A Long Week

AND ONE MORE DAY TO GO!

Quilting is my therapy and there has been no quilting time, for the past few days. Have gone this long without quilting before and maybe longer, but this time I really miss the quiet thinking time. It's like meditating only in a more productive way. Without it, it's been difficult keeping my own seams together!

Thank you for checking in. I hope I am able to post something a little more fun in a few days.

Posted by Leslie Anne Pease at 9:21 AM

Sad Day For So Many

The Boston Marathon weaves through several towns and we used to live right off one of the route roads. Such memories I have. I am sorry that a terrible thing would happen to what is a great time for Boston and it's proud visitors.

Our thoughts are with the victims and their families.

However, it's with heavy heart I include that my family also had some turmoil which has rocked our little world; unrelated to the bombing. Please keep prayers for us along with the Boston tragedy.

This day will always be in my memory.

Now it's my older daughter Meredith's turn for a quilt and she wants a Mario quilt! I found a Quilt Along online which inspired me, however I found other cross stitch patterns to follow. I am also cutting my squares slightly larger than Angela's recommended 1" to create a larger quilt (original finished quilt measures 54" x 72" and mine will be 81 x 108").

These 1.5" squares are the smallest cut pieces with which I have ever worked!!! Definitely a fun pattern. Have the rows finished in the pic, but still have to sew the rows together.

I will also finish this off in the QAYG manner; that final size is too big for me to sandwich on the floor and I really like quilting each block at a time, just about anywhere.

In the Quilt Along, Angela also has everyone use a "Stick 'N WashAway" which was A) unavailable in my local fab store and B) WAY too expensive online. I also think trying to align all the squares on something sticky sounds more difficult than simply aligning one edge to stitch.

Well, I guess I should admit that this isn't really following along with Angela's Quilt Along, but she definitely inspired me and is the reason why I chose to do this quilt opposed to the other Mario quilts I see when I google.

If you would like to see Angela's quilt, here's a link. Mario Quilt Along Project 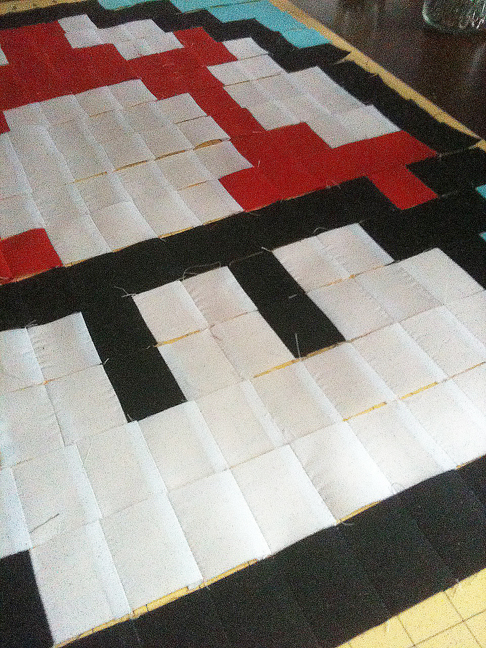 Thanks for lookin'! Please visit my page again, soon.

Posted by Leslie Anne Pease at 9:30 AM

Happy Birthday to my precious baby girl, Laura. I can't believe you are 12 years old! 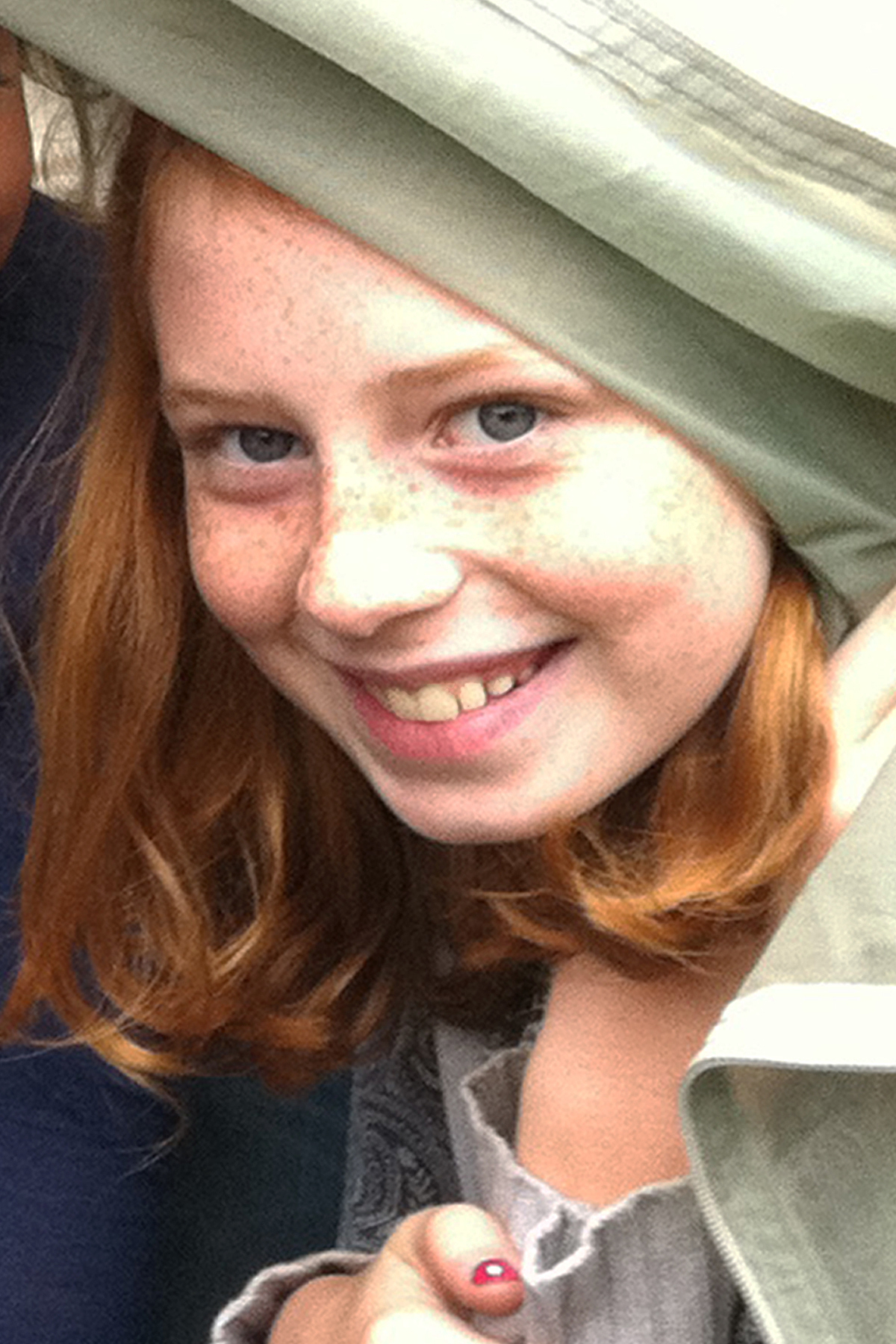 Thank you for being my daughter. Love you so much.

Posted by Leslie Anne Pease at 7:57 AM

My Quilt As You Go quilt for Caroline is finished! Taking it to the laundromat for a final, good cleaning and then off to Connecticut it goes. 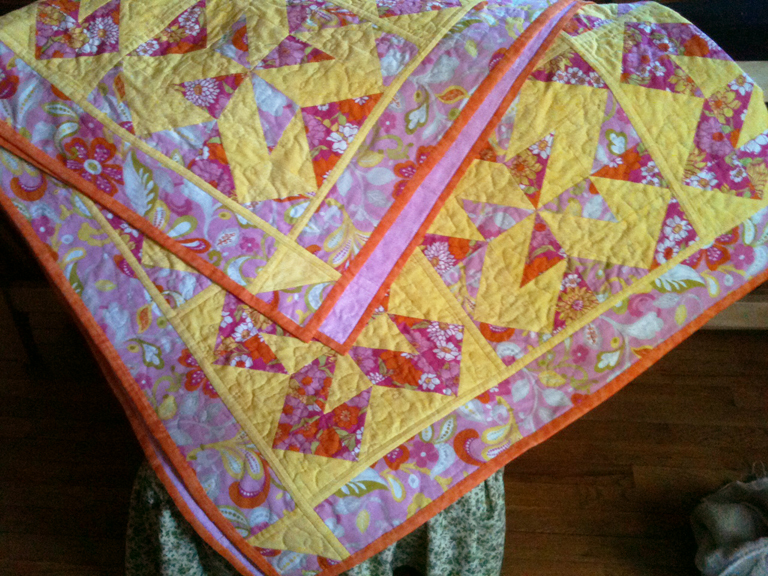 Thank you so much for following the progress of Caroline's quilt. I hope you like the way it turned out.

All I need to do is cut and sew on the binding! Then Caroline's quilt will be washed and sent off. I cannot believe it's almost finished. Been my project since the end of February. 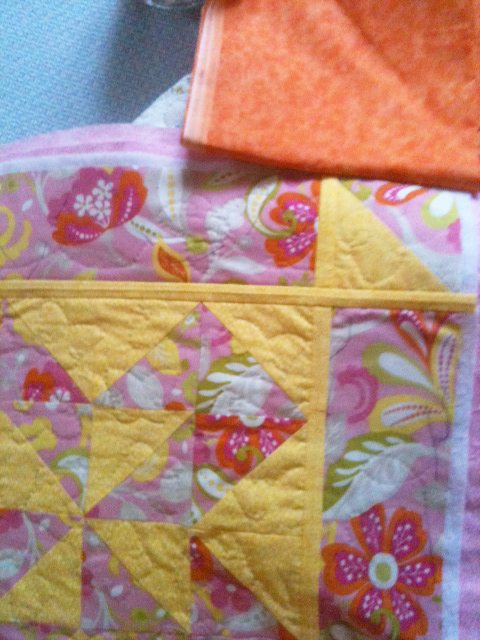 Posted by Leslie Anne Pease at 7:14 AM

Wow, I am almost done with Caroline's quilt; it's taken a little more than a month. I am so excited to send it off to her.

Here's how the back looks. The back is made up of scraps, but I did cheat and buy some fabric to complete a couple squares and the borders. 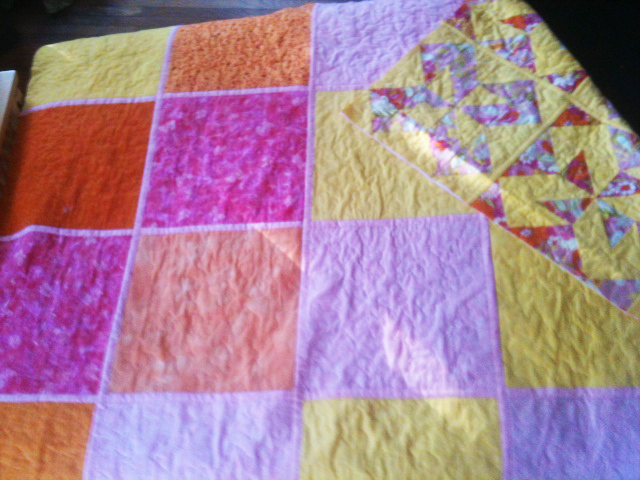 Here you can see the front of the 4" border. I will be attaching the border to the quilt in the front with a yellow sashing and pink sashing in the back (like the rest of the quilt). 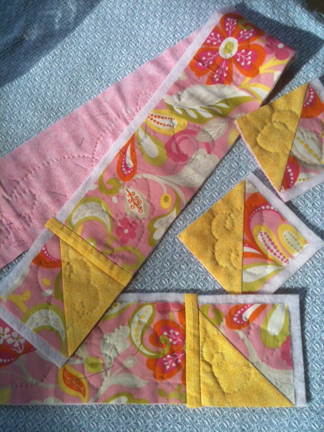 Please visit again to see the binding (still trying to decide with color to use on the edges) and the quilt all finished.
Posted by Leslie Anne Pease at 7:30 AM